The Ugly “Me” Monster! 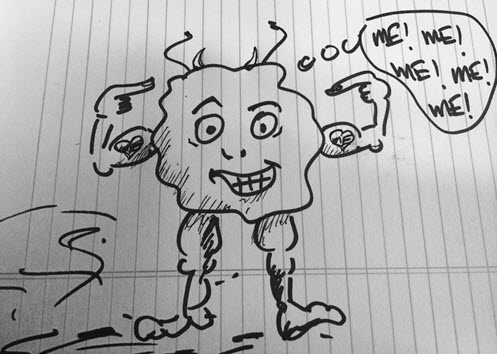 "Hey enough about me, why don't you tell me what you like about me!"  Do you know someone like this. I refer to them as the Me Monster. The person that has such low confidence inside that they have to make sure you are aware of just how great they are. This type of person drives others away. I bring this up because I was on a break during a class and I overheard a conversation and I had to bite my tongue holding back what I really wanted to say.

This individual was talking the entire time and they were trying to make a point, but the point they were trying to make was by propping up their experience, their knowledge and how well educated they were. You could just watch as they didn't listen at all and would just fire back a response that started with words like "Well I know", and "if it were me", and "I happen to". You could see the other person slowly just checking out of the conversation until all they wanted to do was to just get away from this person as quickly as possible.

Conversation happens when two people converse about a topic and do it by listening and opening up the mind to what the other person has to say. Not necessarily  agreeing with them but at least listening.  A me monster on the other hand doesn't really listen but instead they tell grand stories about themselves to substantiate their belief that they are going to shove down your throat like it or not.  I watched this unfold and as the Me Monster kept talking…ME, me, me, me, me…. the other person just got quiet. The Me Monster felt that they were victorious yet in reality they added another person to the list of many that will avoid them the next time they are in the same room together.

The next time you are in a conversation check in and think. Am I making statements or asking questions?  Have I listened and been thoughtful in my response? Guess what! It's ok to agree to disagree!

Related Articles
Uncategorized People size you up in seconds, but what exactly are they evaluating?   Harvard social psychologist Amy Cuddy In her new book, "Presence,"   says people quickly answer two questions when they first meet you: Can I trust this person? Can I respect this person?   She goes on to say that Trust is by far the most inportant. So many times in business today we put […]
Uncategorized Looking forward to this Event.  Inman Connect New York 2016 Schedule Speakers     Thursday, January 28 • 4:00pm – 4:30pm Failing Forward – Lessons Learned from Missed Opportunities     TweetShare Speakers Michael Fanning Senior Vice President, Client Services, Windermere Real Estate Michael Fanning is responsible for assisting with the growth of the Windermere brand. His responsibilities include expanding […]
Uncategorized Why should you take education classes outside your area? Why take Classes outside your market area? from Windermere Real Estate on Vimeo.