The Gen Y can why can't we? 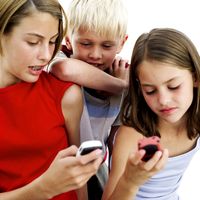 I was with my nephew on a ski trip not to long ago and witnessed  how the Y generation is so different then the previous generations and I’ll explain.

The Y generation is not afraid of technology in anyway shape or form. In fact they have with them at all times some type of smart phone device, maybe an I-phone or a blackberry that is connected to the world no matter where they might be,  they are never very far from a connection, meaning they can text to their hearts content and there is always someone there for them to talk with. As I watch my nephew play his x-box and frequently hit pause then very quickly (Faster then the human eye) text a friend then go right back to his game without missing a beat.  I started to think “wow” what was I doing when I was that age. Lets see I didn’t have a cell phone, the only phone I had was the kind that stayed in the house and plugged into the wall. I did have a bike and usually I would wake up in the morning and get on the bike and ride it till the sun went down. Most of the time I was physically with my friends talking and getting into some sort of trouble but what ever it was we were having fun and interacting in a face to face world. I was never proven wrong with a link form wikipedia and my group of friends were between 3 and 4 not 300 and 1000. I don’t believe that this new way of the  Y generation is wrong or there is something not right about it but the reality of it is that the majority of their time is spent in an online world in some capacity.

I wanted to write about this because as we get older and have to deal with this younger generation it can become overwhelming because we tend to think we have to be like them and I don’t believe that to be true. I know I teach a class on social networking, and a class on how to twitter but I also try to explain that this stuff should not dominate your personal or business world. This article was sent to me the other day form our CMO Jan Edmondson and I think it gets to the point of what I’m trying to say. I still strongly believe that the business of real estate is and will continue to be a relationship business. That said we will have to embrace technology to enhance the way we interact with each other but at the end of the day having a face to face conversation is still far more satisfying no matter what generation you are.  You have to be smart about how you go about it and make sure that you have a good understanding of technology but it does not have to consume you 24/7. If it does I guarantee you,  if you are not a Gen Y,  it will create frustration and diminish your relationships not enhance them. So take some time to decompress, turn off the phone, and the computer and just see how that feels. It’s OK your facebook friends aren’t going anywhere.

Related Articles
Business today It’s all about referrals. Yes this business is all about referrals. Jimmy Dunlap the original Ninja, a Real Estate agent with the Group in Ft. Collins CO, says that if you want to just do one thing to amp up your business it is making sure you focus on the individuals that send you referrals.  If you look at the math […]
Business today Are you a Victim or a Player?   I don't know about you but I'm not one to want to hang out with the type of individual who blames everything that happens to them on everyone else. Sure we all know someone like this don't we? They tend to see the negative in most everything, they always have something going wrong in […]
Business today Real Estate as a Career. There are 3 serious questions you need to ask yourself. 1. Am I committed to having Real Estate be my career? 2. Do I believe in the company I work for? 3. Do I believe in myself?   I read a recent blog form 1000watt and there was one part of the post that stuck […]